The Toronto Maple Leafs are among the least effective teams on the penalty kill so far this season. Blake Coleman could be a huge boost to help the unit.

With the calendar now turned to 2020, the Toronto Maple Leafs have played themselves back into the Atlantic Division race. In spite of key players near constantly down with injuries, Toronto continues to chug along and are fresh off an impressive 10-game point streak.

One area of their game, however, that continues to be a work in progress is their penalty kill, which one of the worst-ranked units in the league. As of January 7, the Leafs are ranked 26th on the PK with a 75.78% success rate and 31 goals allowed shorthanded.

While the Leafs are among the most disciplined teams (11th in penalties against), their struggles in preventing goals shorthanded remains an issue. Their success rate since Sheldon Keefe took over has risen (80 PK%, 14th in NHL since November 20), but there is no doubt improvements can be made.

Toronto could, therefore, potentially be in the market for an effective penalty-killing forward to help give the unit a boost, especially with Ilya Mikheyev out for months. Should they go through with it, one player worth considering is forward Blake Coleman. He fits the mould perfectly and could not only revamp the penalty-kill but also provide versatility on the top-nine forward core.

One thing that the Leafs look for in a forward is one who is quick on their feet, can move the puck well, and has good reach to force turnovers. Coleman has enjoyed success in this department while also being a threat to score.

The 28-year-old’s most valuable asset is his penalty-killing abilities, in which he is one of the most dangerous players to produce with 2 points shorthanded, tied for 15th in the league. 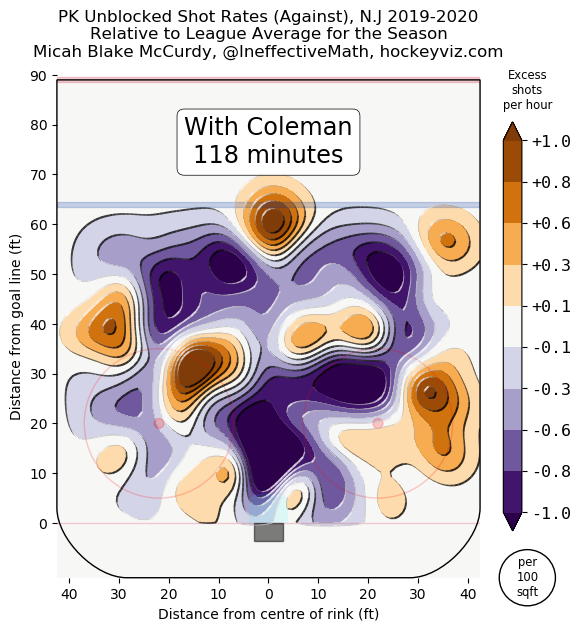 The Plano, Texas native is really good at protecting the middle of the ice and is able to minimize the threat levels against. As a result, the Devils allow fewer shots against from the slot with him on the ice both at 5v5 and the PK compared to when he’s off.

With such impressive numbers, Coleman makes for quite the attractive piece for the Leafs to add to their penalty kill and top-nine forward core. Should they look to pursue him, it’s going to cost them a bit because of his unique skill-set.

Considering that the team is weeks removed from the Taylor Hall trade, the Devils don’t really need to trade Coleman at the moment. Obviously, they would be inclined to reconsider if the right offer comes their way, and it might be worth pursuing with the club struggling to win games.

If Toronto does decide to take the plunge, they will need to pay up a bit in terms of assets heading the other way. A starting point could involve moving Dmytro Timashov, who is rumoured to be on the trade block, a draft pick (either a 3rd or a 4th rounder), and a prospect. Perhaps Coleman could be part of a bigger package in which the Leafs would get a defenceman as well, increasing the price substantially.

The biggest obstacle in a potential deal is Coleman’s contract, in which he has a year left at $1.8 million AAV. Toronto is currently tight on cap space, even with all of the injuries, so a big contract may need to be moved for a deal to work (ex: Cody Ceci). If trying to acquire Coleman for this season is too pricey, it might be better off to wait until the offseason or the 2020-21 campaign since he’ll be on the final year of his deal by then.

Whatever the cost ends up being to get Coleman, it is one the Leafs should really consider pursuing. While Toronto doesn’t necessarily need another winger, they could use a forward that would be effective on the PK and in the defensive end as mentioned earlier.

He can also take up the role of Mikheyev, who was able to move up and down the lineup and find success. Coleman is currently on New Jersey’s second line, so it’s not a stretch to suggest he would have little trouble adjusting to the Toronto Maple Leafs top-nine unit.

For a team that struggles to defend in their own end, Toronto will need all the help they can get to improve their team defense. A player like Coleman could not only help in that department but also give the Toronto Maple Leafs struggling PK a lift that is needed.

While the Leafs will need to give the Devils a number of assets to amass his services, Coleman’s underlying metrics in all-situations combined with his secondary scoring make him worth whatever the cost ends up being.

Regardless of whether it transpires this season or next, the Leafs should try to acquire Blake Coleman.

All stats unless otherwise noted are from Hockey-Reference.com and Natural Stat Trick as of January 7th.

All salary numbers are from Cap Friendly

Regardless of whether it transpires this season or next, the Leafs should try to acquire Blake Coleman.